The drawing below is a vintage 1895 bicycle advertising poster, featuring a nude nymph flying alongside a winged bike. The ad appeared at the height of the European bicycle craze, which liberated women to leave the house without petticoats, chaperone, or horse-and-carriage for the first time. 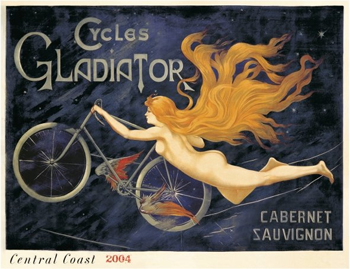 Hahn Family Wines bottles its Cabernet with the famous ad as its label.

The State of Alabama has now criminalized the sale of wine in these bottles, citing the law against alcohol advertising featuring “any person(s) posed in an immodest or sensuous manner.”

Some say that censorship is a slippery slope. But the slope isn’t slippery: those who censor run as fast as they can to attack life wherever they see it. That’s why we have to identify and resist censorship in all its forms, even when we don’t want the specific right being challenged (I’m a Chardonnay guy, myself). We don’t defend this label (or South Park or disgusting stories about violent sex), we defend the right to create, buy, sell, or see this label (and various other creations).

These subjective states are impossible to define, easy to label, and a wonderful target for anyone uncomfortable with their own sexuality. They’re a great way to attack anyone with a shred of life in their bodies or souls. It’s absolutely impossible to defend oneself against such a vague-yet-fundamental attack.

I don’t care where you live: when it comes to sexual expression, we all live in Alabama.

Of course, Alabama is also the state that criminalizes the sale of sex toys. Its lawmakers are clearly obsessed with sex. Too bad they don’t care as much for education. This guarantees that Alabama will stay Alabama—where sexuality is feared more than ignorance.

When “Self-Help” is Part of the Problem