If you thought the Susan G. Komen pink ribbon campaign against breast cancer was really about women’s health, think again. It turns out they’re only in it for themselves.

The organization just terminated their funding of Planned Parenthood programs that screen for breast cancer and related health problems. It seems that some of Komen’s conservative donors have been pressuring them—-they don’t want women getting their breast health services from an organization that also provides abortions, even though the two operations are completely separate. 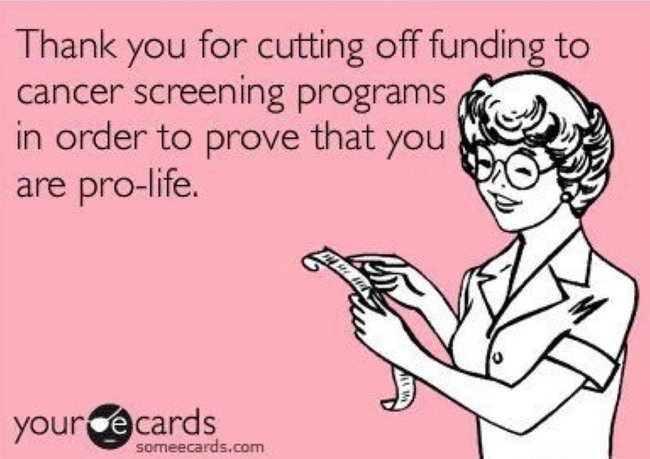 Women, of course, are the losers here. Those who reduce every single issue in America to abortion are the winners. Having successfully politicized private decisions about conception and childbearing, they’ve now politicized breast cancer. And Komen didn’t have the ovaries to stand up to them.

Maybe that’s because Komen’s new senior vice president for public policy is Karen Handel, who ran for governor of Georgia in 2010. Campaigning as a Republican, Handel wrote, “Since I am pro-life, I do not support the mission of Planned Parenthood.” I guess that includes their mission of detecting breast cancer. Apparently that mission is acceptable only when Komen is doing it.

This action shows how far the religious right and the anti-choicers are willing to go. How much more destructive do they have to get before people start vomiting in response, how long until the public is simply too ashamed to be associated with these sociopaths?

Those who kidnapped the Komen organization have opened a new front in the War on Sex, and women with breast cancer are the latest victims. These people are war criminals.

The Komen campaign has made a calculated deal with the devil, tacitly supporting the Congressional witchhunt against Planned Parenthood by using it as an excuse to defund their breast health services. “Susan Komen would not give in to bullies or to fear,” says author Judy Blume. “Too bad the foundation bearing her name did.”