Hugh Hefner, the founder of Playboy magazine, died this week at age 91.

Most people alive today don’t remember two very important things about Hefner: he was extraordinarily innovative and influential, and he was reviled by a lot of people for exactly those reasons.

These two facts tell us as much about our own times today as they do about the repressed era of Playboy’s founding.

When the 27-year-old Hefner started Playboy in 1953, America was a sexually sick country. Adults weren’t allowed to hear the words “sex” or “pregnant” on television, nor see married couples in a bed together. Oral sex, contraception, and factual sex education were illegal. A powerful censor reviewed every American film (and TV show) to prevent “offensive” content from reaching adult eyes.

Homosexuality was considered a mental disorder by practically everyone, including the field of psychiatry. Female orgasm was virtually never spoken of, and was only considered normal if it occurred in the context of intercourse—which meant it didn’t happen very often.

The pornography in circulation at the time was rather crude. Grainy 8mm films and amateurish newsprint magazines both featured bored-looking actresses. Today it would all look like a caricature of “real” pornography. Some people settled for the non-western bare breasts occasionally seen in National Geographic. Others looked at the nude volleyball players in naturist magazines, which were harder to find.

Precisely because sexuality was so repressed in so many ways, this thin gruel of the sexually explicit was popular. And compared to it, Playboy was a banquet. 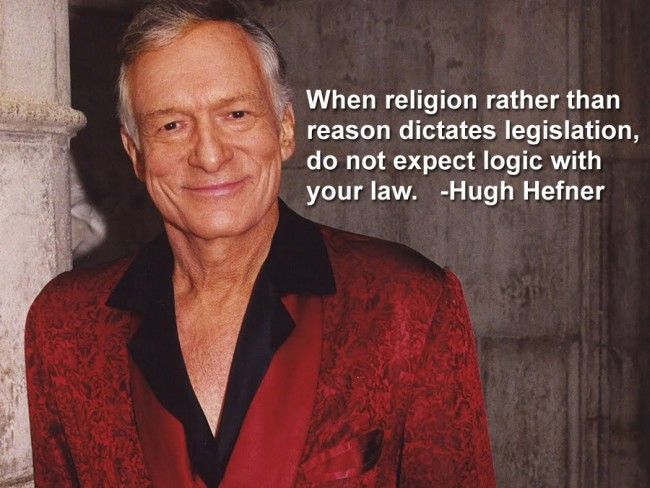 Hefner took sexuality out of the shadows and presented it unapologetically as part of the Good Life. Yes, he emphasized that Good Life for men (and men of class), but he never presented anything other than consensual, playful, life-affirming sexuality. His assumption that women could and would enjoy sex outraged people as much as anything else he did. His straightforward celebration of the female body—without the redemption of romantic love or marriage–got him in trouble too.

Today many people find such ideas not just acceptable, but a standard to laud. Thank Playboy’s unblinking, consistent decades of it.

Unlike virtually all consumer magazines of the time, Hefner felt that ideas and art were part of the Good Life, too. He therefore published articles by and interviews with cultural giants like Alex Haley, Bob Dylan, Ayn Rand, Salvador Dali, Kurt Vonnegut, and Margaret Atwood.

Hefner understood that giving people more sexual choices would be part of a sexual revolution, which was part of a broader struggle for civil rights. He gave a platform to crusaders like Dick Gregory, James Baldwin, and Martin Luther King. He understood the toxic effect that religious training and hypocrisy had on American sexuality, and so he gave a platform to ahead-of-their-time critics such as Lenny Bruce, George Carlin, and Richard Pryor.

In fact, for many years Playboy was one of the most important places to read about the politics of sexuality. Before blogging and tweeting became ubiquitous, freedom of the press really did belong to those with a press—and American magazines were incredibly vapid about sexuality. Playboy ran the first substantive article critiquing the then-new drug Viagra (I know, because I wrote it).

Playboy also ran one of the very first articles critiquing the then-new concept of sex addiction (I wrote that as well). And Playboy’s interview in which Jimmy Carter acknowledged he had “lusted in his heart” for other women (a serious sin to Carter and his evangelical community) established a meme that continues to this day.

Outside the magazine, Hefner walked his talk. He established a foundation to support Americans’ First Amendment rights. He generously funded a wide range of sex-positive causes, including the founding of the International Academy of Sex Research, a crucial organization that still thrives today.

So Hefner was an innovator.

And he was caustically attacked from many directions throughout his entire life. Playboy was accused of encouraging infidelity, of disrespecting women, of trivializing sex. It was described as immoral, harmful to both the men who bought it and their adolescent sons who masturbated to it. Playboy was seen as a challenge to religious sexual morality—the one charge Hefner would gladly acknowledge was true.

That’s the real measure of Hefner’s foresight and legacy—the vision he so doggedly pursued for more than half a century was considered radical at the time, yet mainstream today.

He did it his way—which, when it comes to sexuality, is exactly what he would encourage the rest of us to do.

Is Fear of Social Media Rage Censoring Your Sexuality?

Sex and Death–What Do They Mean?