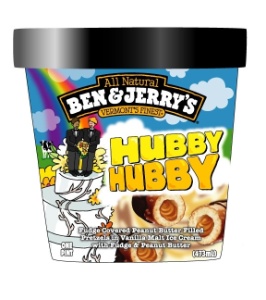 Both sides agree—the whole fight over same-gender marriage and other civil rights for gays is about the right to decide what’s normal.

Now there’s nothing more normal than ice cream, and there’s no ice cream more delicious than Ben & Jerry’s. The brand is playful, too, with flavors like Berried Treasure, Economic Crunch, and my favorite, Cherry Garcia.

Combining the two, the Vermont-based company is celebrating the legalization of same-gender marriage in Vermont by renaming their “Chubby Hubby” flavor “Hubby Hubby.”

The move is both subtle and direct. Subtle insofar as nobody’s yelling about anything. Direct in that when a kid reaches for a container of it, or a parent pays for it, “Hubby Hubby” is what it is. Two grooms, right there on the label.

That’s partly how this social justice issue is going to be resolved, once and for all. By people having everyday contact with gay doctors, gay swim coaches, gay neighbors. Gay relatives who are as boring as most relatives. And yes, gay-themed ice cream.

People who think of gay people as a separate species, as a group of sick or damned creatures who must be kept from infecting the rest of us, are fighting a losing battle. And they know it—they’re watching their straights-only world crumble piece by piece. On a good day I can really sympathize with their anxiety and sense of impending loss.

On other days I want to remind straight people that this is our fight, too. As long as anyone can be demonized or deprived of simple civil rights (the right to be a foster parent, the right to sit at a dying companion’s hospital bed) because of their sexuality, none of us is safe—no one who’s into bondage, or non-monogamy, or sex toys, or cybersex, to name a few. In other words, all of us.

Not every hubby—gay or straight—is yummy, but Ben & Jerry’s blend of peanut butter, pretzels, chocolate, and vanilla malt ice cream sure is. It’s double good—Hubby Hubby.

Ice cream. What could be more normal?

When “Self-Help” is Part of the Problem