Say a deranged woman attacked the Mona Lisa as it hung in the Louvre last week. It would be big news worldwide, including in the U.S.. Your favorite TV station would of course show the painting and discuss its historical and economic value. 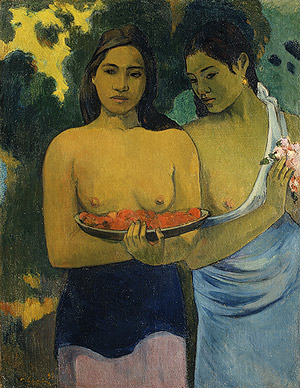 Now what if instead of the Louvre it was America’s National Gallery in Washington, and instead of DaVinci’s Mona Lisa it was Gaugin’s Two Tahitian Women. Same deal, right? Some perky anchorwoman would read the teleprompter: “…masterpiece done for the upcoming Exposition Universelle of 1900, similar to Gaugin’s famous works now hanging in London’s Tate and Moscow’s Pushkin. It’s worth eighty million dollars, John, not exactly a picture of dogs sitting around playing poker, huh?”

That would be the grownup way, but this is America—and if a painting involves Tahitian Women, the fear of sex can’t be far behind. So depending on what station you watch, you saw half the painting (duh, the upper half); all of the painting, but with a banner “Gaugin Painting Attacked” modestly covering the models’ breasts; and on fair-and-balanced Fox stations, the entire painting with the nipples blurred out. And yes, some stations showed the masterpiece as it is.

“This is evil,” screamed Susan Burns as she pounded the painting with her fists. It “has nudity and is bad for the children. He has two women in the painting and it’s very homosexual. I think it should be burned…”

Ironically, that’s the same reason why American TV stations couldn’t simply report the news of a century-old, world-reknown masterpiece has been attacked by a loonie who thinks a few inches of bare breasts are dangerous.

Remember the Janet Jackson incident in the 2004 Super Bowl, when the FCC fined TV stations for showing her nipple for a half-second. Remember last year’s Illinois judicial fiasco, when an adult was thrown out of a courtroom and jailed simply for wearing a t-shirt—and American TV and newspaper audiences were not allowed to see the t-shirt (it said “I own the pussy, so I make the rules”). And remember how the FCC challenged NBC’s broadcast of 2000-year-old “naked” statues at the 2004 Athens Olympic Games.

Of course broadcasters are nervous in the wake of these government decisions. And even though the Supreme Court has told the FCC to stop destroying our constitutional rights, no one really trusts the FCC to obey—and no one wants to spend millions defending themselves against the next government abuse.

So Janet Jackson and “I own the pussy” and the Greek statues’ penises are not trivial. They’re our political culture in action. And no one’s interrupting the juggernaut.

The woman who attacked the Gaugin isn’t alone in her eroto-paranoia; tens of millions of other Americans live in her delusional world of Devil Sex. And our traditional mass media are catering to these loonies instead of to sane adulthood. At a time like this, it’s hard to see television and newspapers as worth saving from destruction by the internet.

So here’s my wish for those who applaud Burns for attempting to save humanity by destroying part of its cultural patrimony. Someone should destroy every artifact you deem precious—grandma’s needlepoint, your dead son’s uniform, your niece’s ballet shoes, and every photograph you’ve ever taken.

Because someone, somewhere, surely finds them offensive.